“Once upon a time, Microsoft started a Windows Azure developing contest named new CloudApp();. While it first was only available for US candidates, the contest was opened for international submissions too. Knight Maarten The Brave Coffeedrinker and his fellow knightsmen at RealDolmen decided to submit a small sample application that could be hosted in an unknown environment, known by the digital villagers as “the cloud”. The application was called TwitterMatic, named after the great god of social networking, Twitter. It would allow digital villagers to tell the latest stories, even when they were asleep or busy working.”

There, a nice fairy tale :-) It should describe the subject of a blog post series that I am starting around the techncal background of TwitterMatic, our contest entry for the new CloudApp(); contest. Now don't forget to vote for us between 10 July and 20 July!

Some usage scenario’s for TwitterMatic:

Perfect excuses to build our application for the clouds. Now for something more interesting: the technical side!

If you are impatient and immediately want the source code for TwitterMatic, check http://twittermatic.codeplex.com.

Since we’re building a demo application, we thought: why not make use of as much features as possible which Windows Azure has to offer? We’re talking web role, worker role, table storage and queue storage here!

For people who like images, here’s an architecture image: 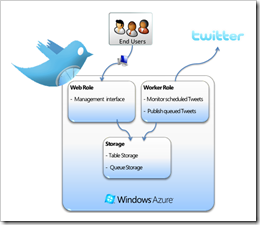 The next parts of this series around Windows Azure will be focused on the following topics: