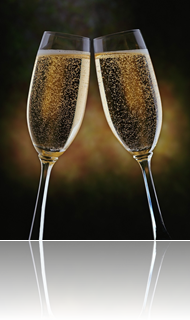 Since everyone (that is Simone Chiaretta and Phil Haack) seems to be blogging about 2008 and their top posts, here’s my list.

1. Reuse Excel business logic with PHPExcel – This post explains how to use PHPExcel in a business scenario where a spreadsheet contains calculation logic which is used in a PHP application.

4. Code based ASP.NET MVC GridView – This post gives a shot at a gridview for the ASP.NET MVC framework, built using expressions.

About the past year

Though 2008 seems to have been a year in which I mostly blogged on the ASP.NET MVC framework, the top 3 posts seem to be on PHP and ASP.NET. Still, 2 posts on ASP.NET MVC in my top 5.

The past year brought lots of attention to my PHPExcel and PHPLinq project, both from the PHP side (Zend) as well as the Microsoft side. Both projects will continue evolving in 2009, watch out for a huge post on all new features in PHPLinq in January. By the way, I did not blog about a great milestone PHPExcel made: PHPExcel has been downloaded over 120.000 times! 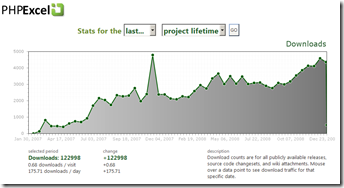 Blogging about ASP.NET MVC ever since Microsoft started working on that framework also brought me and my blog a lot of attention. The CarTrackr sample application I created for a VISUG session in Belgium has also been downloaded over 800 times.

My blog had 115.988 visits in the past year, with currently around 400 unique visits a day (not counting RSS readers of which I don’t have any stats unfortunately). Keep spreading the word, keep subscribing to my RSS feed.

2009 will bring more good stuff: continued development on PHPExcel and PHPLinq, more ASP.NET MVC, perhaps some more on Azure or any other new Microsoft technology. Also expect a book on the ASP.NET MVC framework with Packt Publishing, named “ASP.NET MVC Quickly”. It’s currently in technical review and should be available somewhere near end January.

Happy new year 2009 to all my readers! See you around next year.