As discussed in the previous post, we all know it is important to perform validations to prevent a Cross-Site Request Forgery (CSRF) attack against our application. Imagine inheriting a code base that has zero measures implemented? How would you find which action methods need a [ValidateAntiForgeryToken]?

Today, we will look at using ReSharper to find all action methods that need [ValidateAntiForgeryToken] added.

What’s the plan? Which action methods are we after?

So a good plan of action would probably be to search for action methods, where we can then:

Sounds like a plan! But there are over a thousand action methods in that code base! How do we find the ones that accept a POST?

The prototypical action method we are after:

Roughly speaking, the action methods we are after look like this:

This sounds like the perfect job for Structural Search and Replace in ReSharper!

Structural Search and Replace in ReSharper

If you have ReSharper installed and have never tried Structural Search and Replace (SSR) before, let’s give you a quick introduction.

Sometimes, we need to go just beyond a simple, textual find/replace. With SSR, we can have ReSharper search for language structures that contain certain argument or return types, statements, expressions, and more. This works in C#, VB.NET, JavaScript, HTML and Aspx.

As an example, let’s say we want to find all calls similar to someEnumerable.Count() > 0 and replace them with someEnumerable.Any(). But someEnumerable can be called someList, or people, or customers, or… - you get the idea: too many cases for a textual search/replace, we are after those IEnumerable and don’t care about the variable name!

In Visual Studio with ReSharper installed, we can use the ReSharper | Find | Search With Pattern menu and bring up the search dialog. As a search, we could enter $enumerable$.Count() > 0. The $enumerable$ placeholder will be recognized as an expression, which we can edit, and set to a given type System.Collections.IEnumerable. 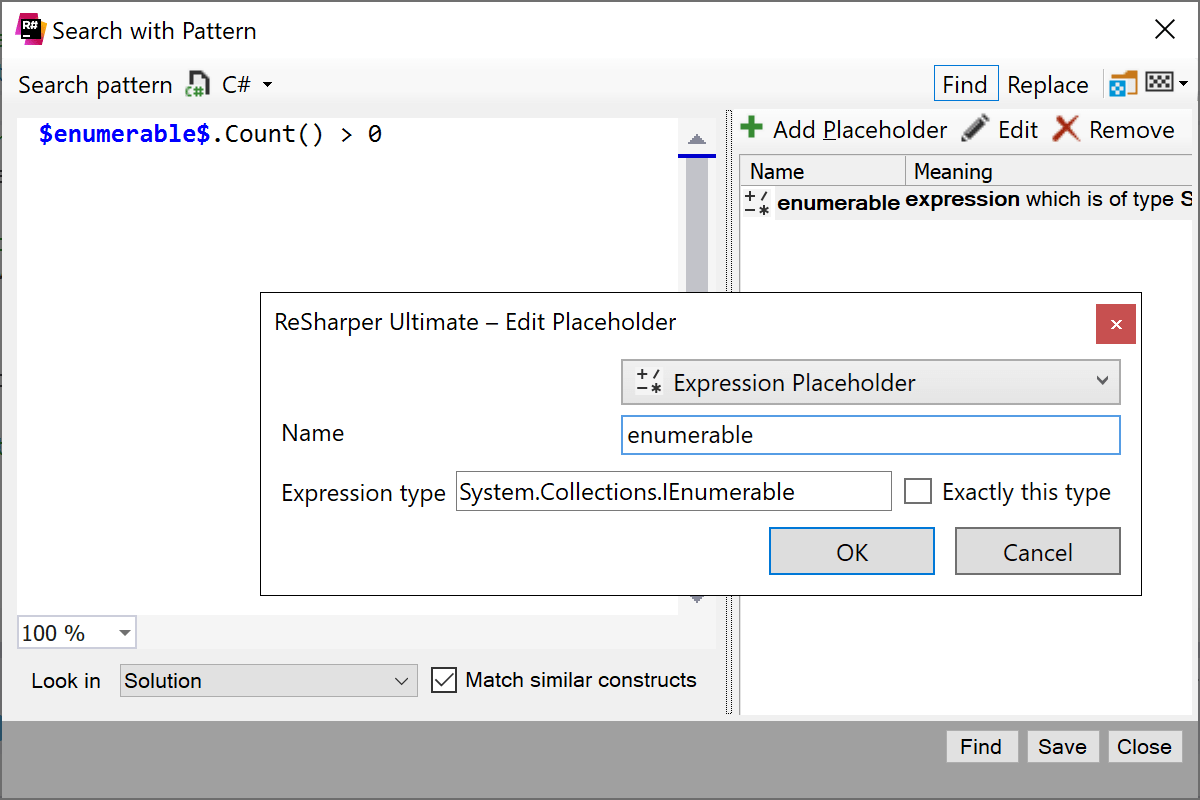 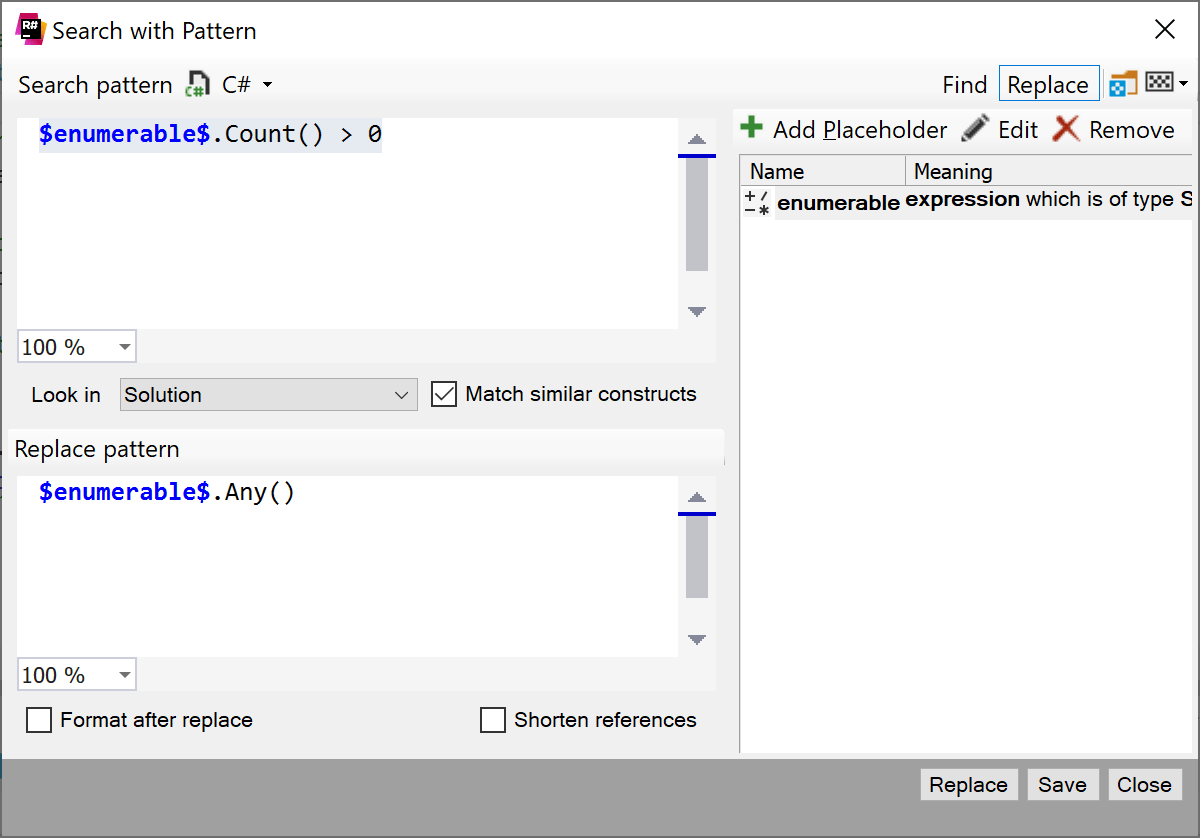 Neat, no? Looks like something we could use for finding our action methods!

Tip: Check this blog post, the Structural Search and Replace web help and if you are after some example patterns, the patterns repository on GitHub for more goodness!

Using Structural Search and Replace to find those action methods!

So, ReSharper’s Structural Search and Replace (SSR) it will be! We already simplified our prototypical POST action method to this:

… and that translates into a SSR pattern!

Note: Do make sure to set the type for $HttpPost$ to Microsoft.AspNetCore.Mvc.HttpPostAttribute, otherwise we will find all public methods that have any attribute. Also note that I did not specify a type for $ReturnType$, so that it can match any return type. Optionally this could be set to a subtype of IActionResult, but then direct type returns like a simple string would not match.

Our replace pattern will add , ValidateAntiForgeryToken as an attribute, done. 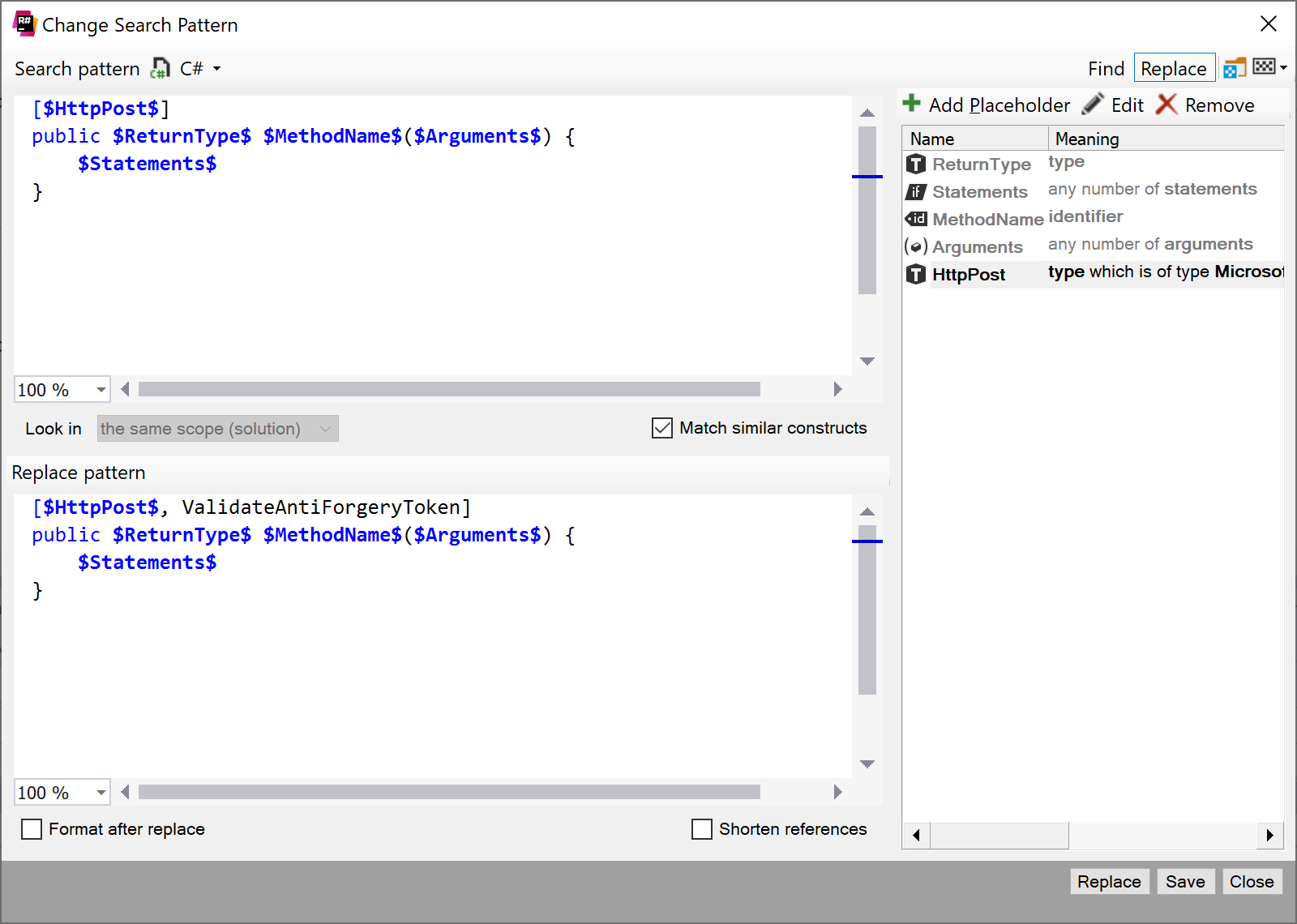 We can now run a replace, and get a preview of all occurrences that match our SSR pattern: 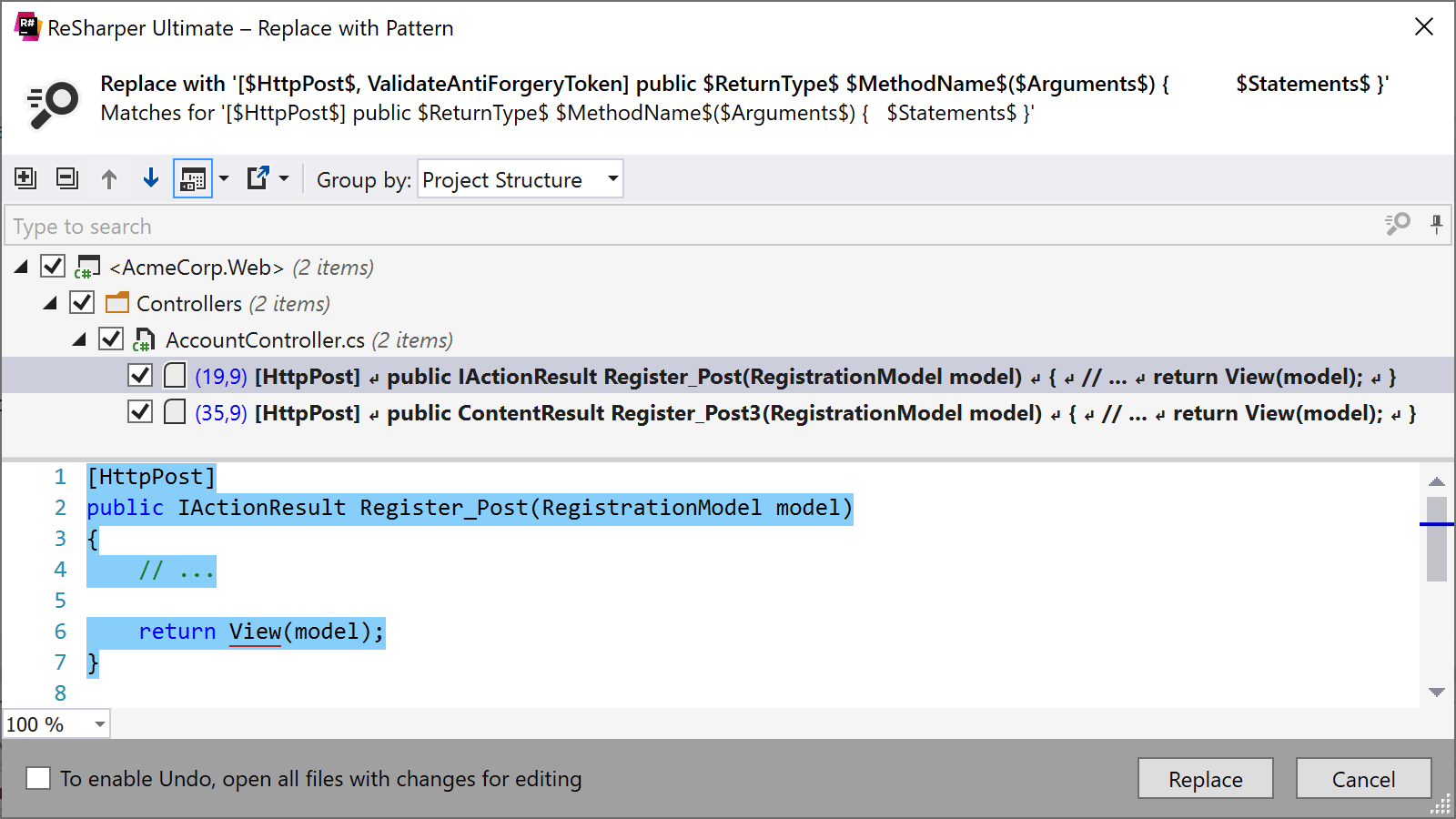 Excellent! Or is it…

We are missing some cases!

Our Structural Search and Replace (SSR) pattern misses some cases:

What to do, what to do! Simple: think of edge cases, write some SSR patterns, see if you can replace them. Done.

The issue I personally have with thinking of edge cases, is that there’s a 100% chance we will miss some edge cases. Also, we would have to run SSR regularly on our code base if we want to make sure our future self or team members properly keep adding those [ValidateAntiForgeryToken] attributes.

Smells like a unit test! And that’s a good topic for our next (and last) post in this series: Unit testing for ValidateAntiForgeryToken and clever navigation in the ReSharper/Rider test runner.