Recently, someone asked me to look at their ASP.NET MVC application and help figure out why a certain request was taking 16 seconds to complete. It’s always fun to look at those things, so I could not pass on this nerd snipe.

Much like with hunting serial killers, you have to become one with the scene at hand. Watch the crime scene. Look at the things that happen, and observe.

How can you observe a web application? The browser is a good start. Since this specific call was returning JSON data, I thought it easier to look at it in Fiddler instead. A typical response looked like this:

When running this request and retrieving the response, response times were indeed between 12-16 seconds, for a call that in the end returned a few 100kb of JSON.

Looking at this response, a few things can be observed:

Since the code was readily available, it was easy to run this application locally and profile it. So I fired up my trusted friend dotTrace and used timeline profiling on the application.

A quick side note if you are unfamiliar with dotTrace: timeline profiling goes beyond traditional profiling in that it also captures Windows ETW events and allows correlating certain application activity with a certain HTTP call, inspect exceptions, and gives some insights in memory usage etc. as well. The ideal way of getting a first view of what an application is doing!

Here’s what the snapshot looked like when making that specific request a number of times: 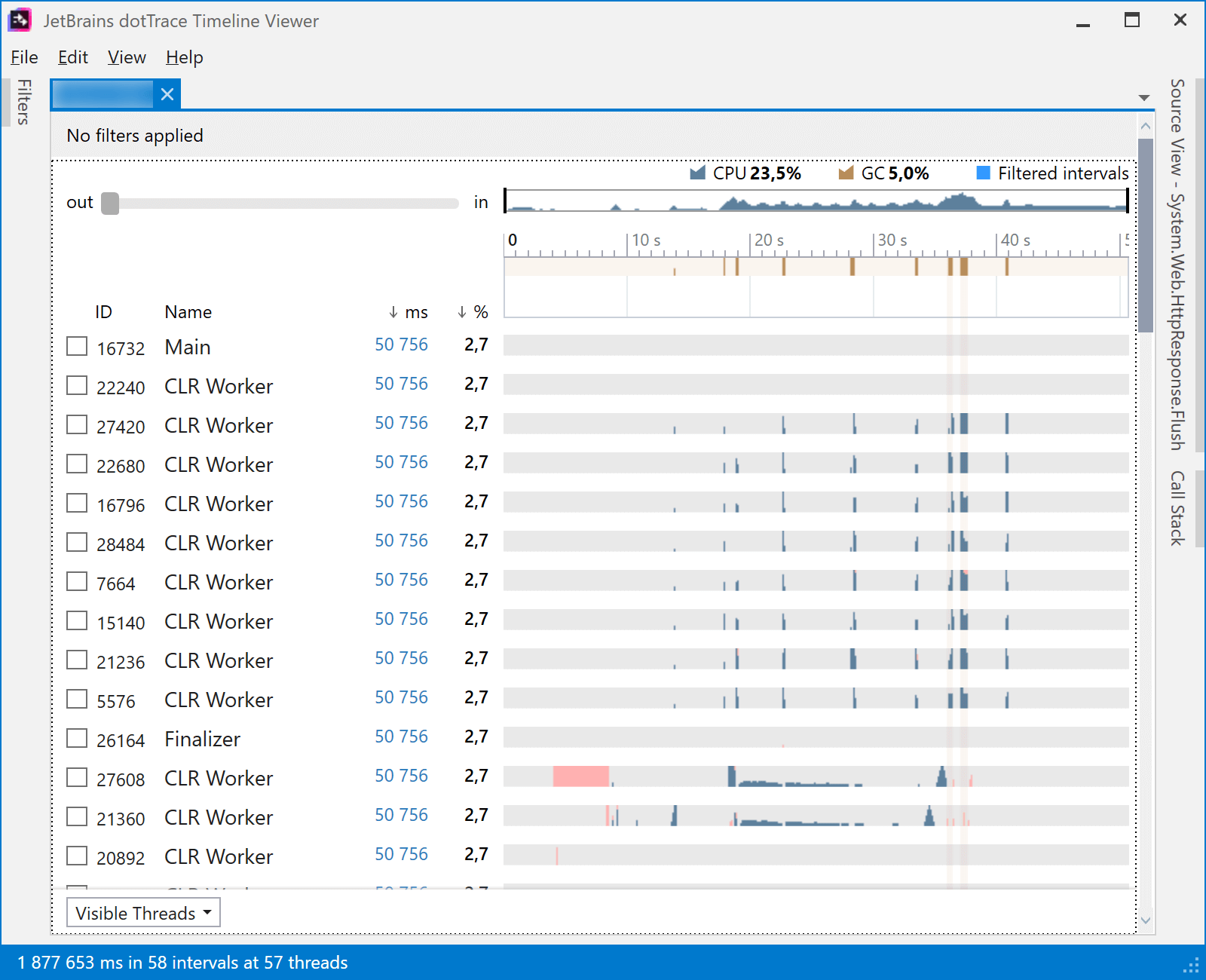 Whoa! A couple of things to observe!

That already gives quite some information. Let’s look at the interesting period in the timeline, and then inspect the call stack. 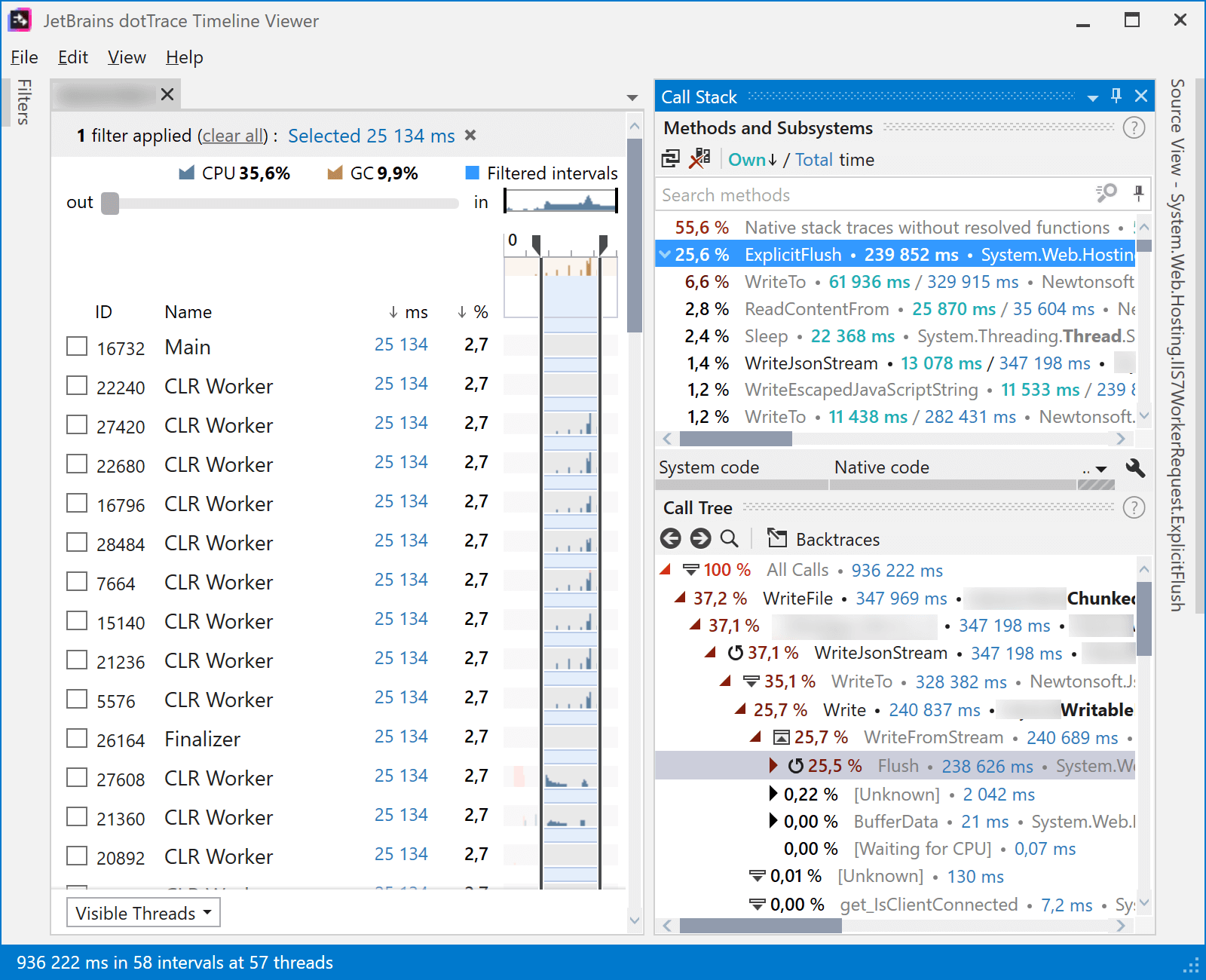 Even more whoa! What we can see here is:

Interesting! The heavy hitter is the ExplicitFlush method, in the System.Web.Hosting.IIS7WorkerRequest class. Surely Microsoft would optimize their code, right?

Putting one and two together

The next thing to look at in this case would be the call tree we observed. Summarized, it looks like this:

How do we go from here… Let’s start at the top and see what happens in more detail!

The controller itself was not doing much work, just loading up a collection from the database and then returning JSON in a ChunkedFileStreamResult. Roughly this:

Nothing too special, right? Just some JSON being streamed.

The ChunkedFileStreamResult class looked like a class that was created to be able to return a Transfer-Encoding: chunked result to the client. Some basic info on chunked transfer encoding is available on Wikipedia. The general idea behind using this is that neither the sender, neither the receiver have any idea of the stream being sent, nor whether it will be sent at once or in bits and pieces when data becomes available.

When would you use this? Typically in any of these scenarios:

In this application, it could make sense to indeed use chunked encoding. The size of the JSON being sent is unknown upfront, and who knows, if it becomes 500 MB it would be a nice advantage not to have to buffer that in memory, and just send it out in bits and pieces.

Enough theory, let us look at the code:

Nothing fancy, this is pretty much how we can enable chunked encoding in any ASP.NET application:

In the above code snippet, some work happens executing the _streamAction. And we have seen that work in Part 1 - we are writing JSON to the output stream, essentially. What could possibly go wrong here?

Part 4: being confused about PInvoke

Looking at all the code snippets, things seemed quite okay. Yet the profiler shows differently. And reality, too - the request takes too much time to execute!

So let’s circle back to our observations and look into the ExplicitFlush method, in the System.Web.Hosting.IIS7WorkerRequest. Good thing is that the source code is available!

What ExplicitFlush does under the hood is call into native code using PInvoke, flushing data to IIS.

Wait. PInvoke??? That’s okay to use, but if it gets called many many many times, PInvoke may be the source of the performance penalty we are seeing. As per the docs:

PInvoke has an overhead of between 10 and 30 x86 instructions per call. In addition to this fixed cost, marshaling creates additional overhead. There is no marshaling cost between blittable types that have the same representation in managed and unmanaged code. For example, there is no cost to translate between int and Int32.

So… could it be that we are making too many PInvoke calls under the hood that don’t marshal much data at once? Is this the performance hit we are experiencing?

Let’s see if we can figure out why ExplicitFlush is being called so many times… Flushing data to a stream happens when writing to a stream, so let’s open our controller again and then use ReSharper’s navigate to decompiled code (or similar) and step deeper into an example call:

Navigating into WriteStartObject gives us a call that delegates a write action to an internal writer:

That inner writer is the StreamWriter class, as can be seen from the using statements in code. Navigating deeper gives us:

We are on to something! Preliminary conclusion is that for every single call to Write... in JSON.NET, we are calling an underlying Flush (which in the end hits our dreaded ExplicitFlush).

And for sure: every single JSON token we are writing is triggering a flush. Making a PInvoke call under the hood, because that’s what we told ASP.NET to do by setting response.BufferOutput = false; in the ChunkedFileStreamResult class.

GOTCHA! But now, the fix…

There are in fact two fixes to this. A first one is setting AutoFlush = false on our StreamWriter. This will not invoke the underlying ExplicitFlush on every write, and would solve things for sure.

We decided to go with another approach, though. As we mentioned earlier in this post, ChunkedFileStreamResult could be useful if we do not know the size of the data we will be sending. We don’t know, but we do know that the typical JSON returned will not be too large (a few 100kb maximum), so there is no need to use chunked encoding anyway.

So in our controller instead of using this special stream result, we can simply return our JSON by rendering it into a string and returning that instead. Rough pseudo-code:

Under the hood, this fix would not set response.BufferOutput = false;, which means ASP.NET will buffer data for us before making the PInvoke call into IIS to send data back to the client.

Running the code base after this fix yielded 450ms on that specific request, instead of 12-16 seconds.