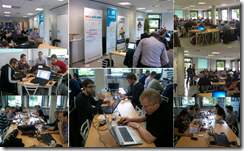 As one of the board members of the Windows Azure User Group in Belgium, I wanted to write a post on an event we organized last weekend. We do more events (one each month), however this one was way out of our comfort zone. Typically, we have an evening event in which a speaker delivers one session to around 40 attendees. Last Saturday, we organized our first Windows Azure Saturday, a hackaton followed by a barbecue.

Here’s what I will remember about our event…

The idea for a “hackaton plus barbecue” emerged a couple of months ago. The idea was simple: get a group of Windows Azure enthusiasts together, code for a couple of hours and have a fun barbecue afterwards.

At that time, the idea was small. We’ve done some hands-on events under our “Code d’Azure” brand earlier, so we had the idea of having some 10 attendees bringing their laptop, especially since we were planning to host it on a Saturday. We were wrong…  Almost 50 people registered for the hackaton and barbecue!

“10 EUR entrance but you get it back”

On regular events, there’s always a number of no-shows. Not a problem although it’s always difficult to know how much sandwiches to order. This time we had a barbecue so to ensure we did not order too much meat, we’ve asked attendees to pay for the event. If they showed up, they would get their money back. Otherwise the money would be used to cover the cost of the barbecue.

This system worked out well! In fact, people wouldn’t have had a problem with the user group keeping their 10 EUR (in fact, some attendees refused to take it  back and offered to sponsor their 10 EUR as well).

Applications developed during the hackaton

Here’s a list of the applications developed during the hackaton:

To be honest, I did not expect too many good applications. We only had 3,5 hours to code and a s a developer I know that’s almost nothing. Again: wrong. The apps that have emerged were really, really cool! shellR for example (the guys who won the grand prize) was offering a PowerShell console through a browser, which could connect to PowerShell agents around the globe enabling you to manage a computer through your browser. A startup idea in my opinion! 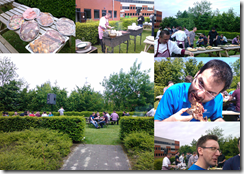 RealDolmen provided us with the location for our event. We were looking for a location that could house 50 attendees and their laptops, had a room to eat (in case of bad weather) and a garden in case of nice weather. Their main office had it all! The weather was nice so we had a great barbecue in their garden.

On a side note: when organizing a party, the guys from ”Lekker Beest” are absolute masters in the art of cooking meat and fish! Yummy in the tummy!

Thanks to our sponsors, we were able to provide the following prizes to the apps being developed:

The first prize was a unique thing: a 2 person Windows Azure North Europe region datacenter tour (flights, dinner, hotel and a tour through the datacenter where you've deployed your app) sponsored by Microsoft.

Thanks to all of our sponsors!

Every conference has wifi problems. We had none. Which does not mean we didn’t have networking issues. The Internet uplink we arranged was an ADSL connection, an “asymmetric" digital subscriber line”. All blahblah, except for the asymmetric aspect: if someone launched an upload to Windows Azure, others were experiencing a really slow connection. And as uploads were happening all the time, well, guess what: the connection was a bit flakey. This is something we would do different on a future event.

It was a blast! Have a look at the Tweets around our event. We will definitely do this again. Thank you sponsors, thank you attendees and thank you fellow AZUG board members for making this a splendid event!