I'm sure you have already heared of SilverLight before, right? If not: it's Microsoft's answer to Adobe Flash, providing the same features + XAML-like markup + easier databinding + ... Now you're up to date: the Redmond people have just released a new site, Microsoft Tafiti, which is basically Live Search combined with a rich SilverLight interface. Tafiti means "do research" in Swahili. Don't think I'm a native Swahili speaker though, I found this here 8-) 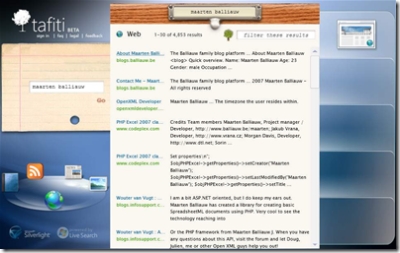 The screenshot I made was first rendered in FireFox. No need to worry your SilverLight application not going to work on other systems than Windows + IE!

If this is the way the web is evolving, I like it! Slick graphics, but not the "feeling" you are working in a browser plugin.