My friend and colleague Matt Ellis has this habit of nerd sniping me. Sometimes intentional, sometimes accidental. Today, he asked whether we could have a quick look at an issue together, which ended up being a nerd snipe of the latter category.

Here’s a blog post about how the new .NET project format references framework assemblies, and how it seems to be impossible to map those back to individual NuGet packages. Buckle up, sit back, and follow along!

The story starts with an issue in our tracker: RIDER-33542 Support adding NuGet package reference for assemblies stored in nuget packs folders. This issue describes a feature in both ReSharper and Rider that seems to be misbehaving. Let’s look at that.

When we have multiple projects in a solution, both tools offer a way to automatically reference NuGet packages when using a type that is not referenced yet. For example, when we try using the IMapper interface in ClassLibrary1 and we don’t yet have a reference to it, a quick fix lets us reference the NuGet package automatically. This works because in WebApplication, we have information about the package & the types contained in it. 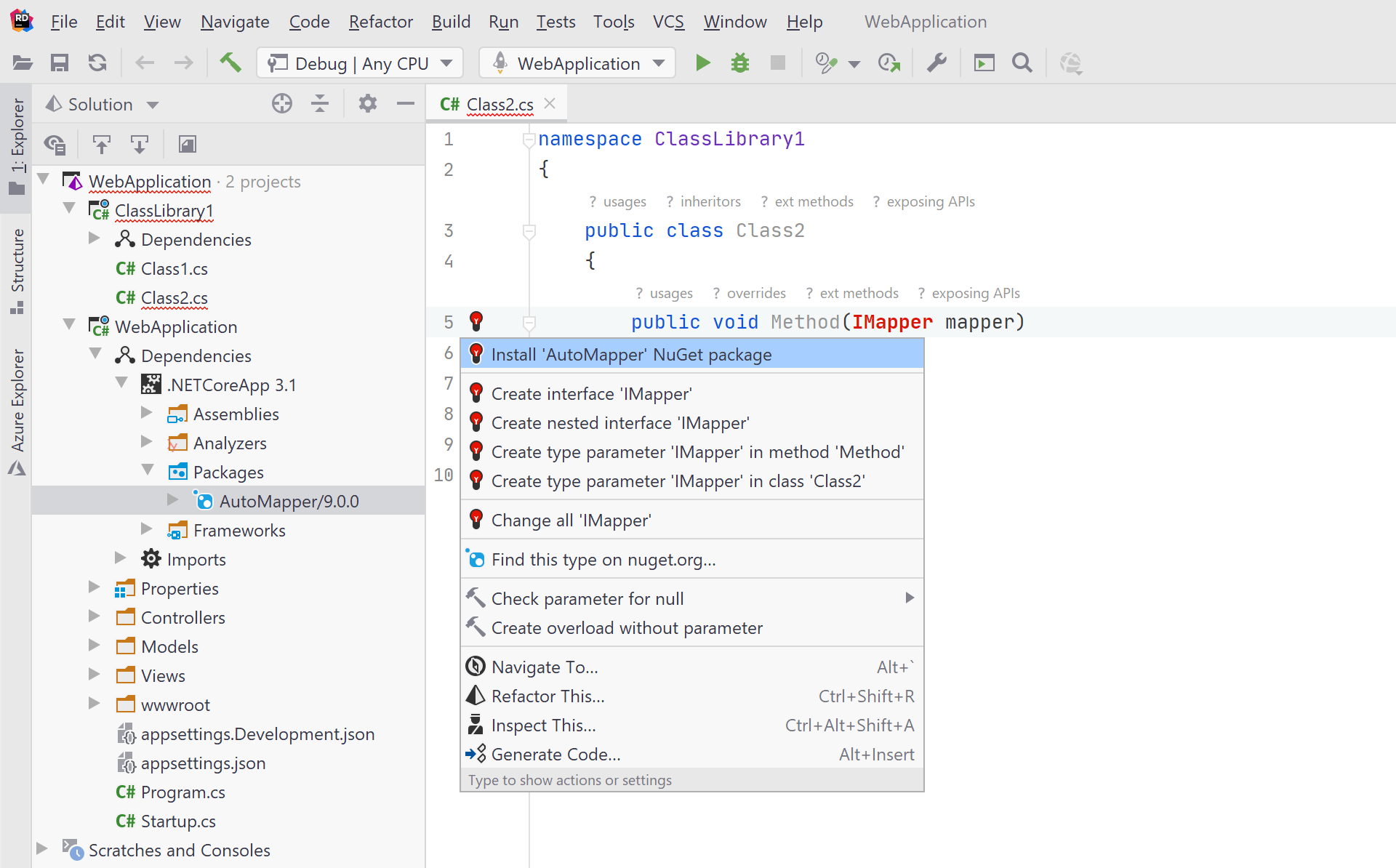 The quick fix is available for package references that are known in other projects of the solution, as well as for assembly references.

Now, the issue that triggered this blog post documents a situation where this goes wrong. In our ClassLibrary1, let’s reference IServiceCollection using this quick fix. We know the type from the web application project, so this should work, right? 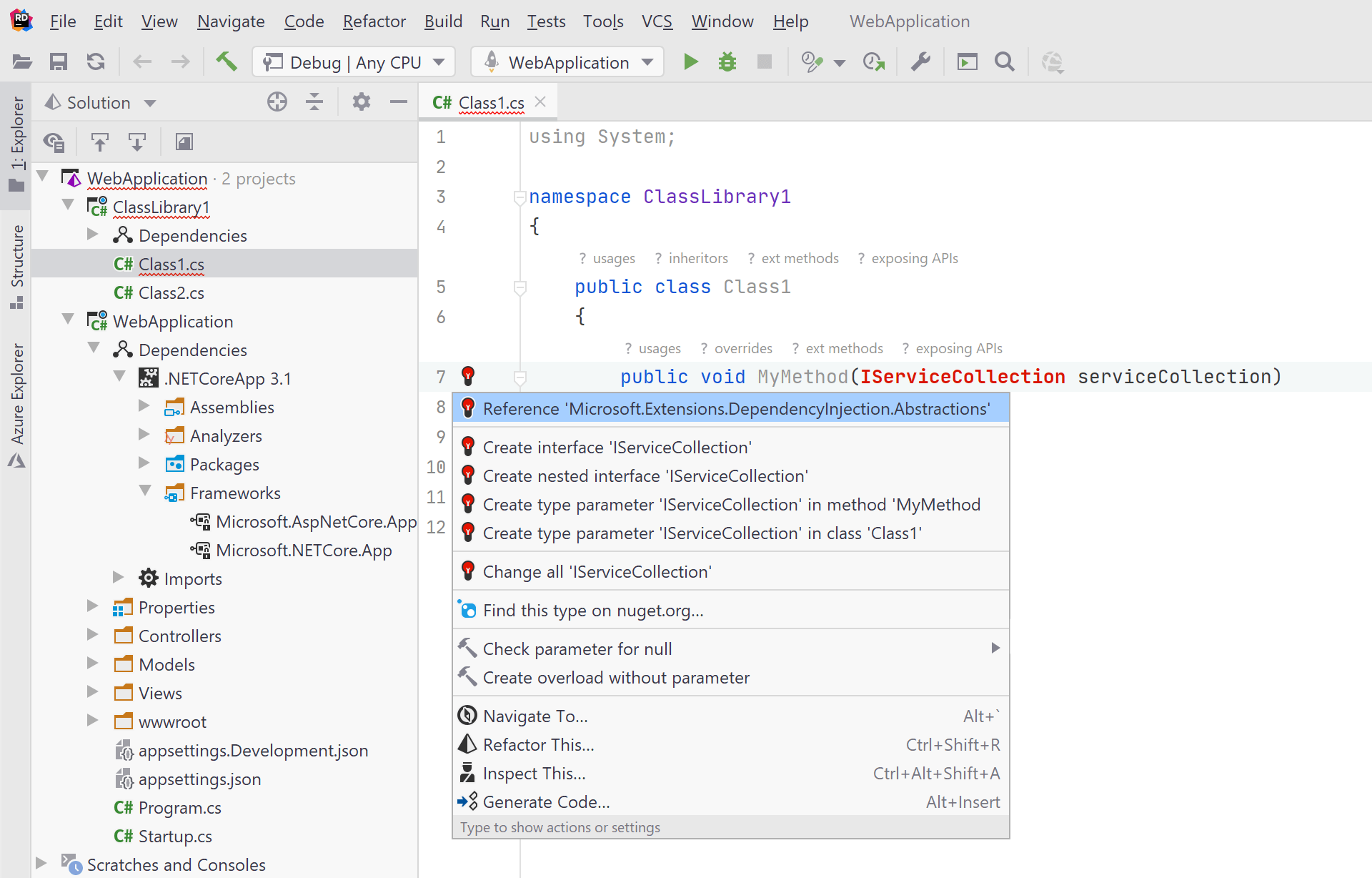 Turns out this does not work. Library authors who reference this type will know it lives in the Microsoft.Extensions.DependencyInjection.Abstractions package, yet ReSharper and Rider add a reference to an assembly located under the .NET SDK’s folder. Here’s what our project file looks like after executing this quick fix:

Wrong? Up for discussion. From a UX perspective, yes. From a technical perspective, it seems correct. There is no package reference to Microsoft.Extensions.DependencyInjection.Abstractions anywhere, but there is an assembly reference that holds this type, which is what ReSharper and Rider reference.

Right now, it seems there is not much we can do to have better behaviour here, apart from disabling the quick fix for this case.

Why do the Developer Tools create an Assembly Reference?

The new project file format in .NET Core uses the Sdk reference to simplify the rest of the project file. For example, the web application project in our example solution uses the Microsoft.NET.Sdk.Web SDK.

In Rider (well, the 2020.1 EAP), we can use the child nodes of the project to navigate SDK references and so on. We can even open editor tabs with these files, showing us some internal workings of .NET Core.

Following the SDK reference, we can see that the Microsoft.NET.Sdk.Web SDK itself references four other SDKs:

We can also see frameworks that are referenced in our web project (Microsoft.AspNetCore.App and Microsoft.NETCore.App). Next to that, there is a node that lists implicit assembly references. These are all of the assemblies that are being referenced by the SDK (and their referenced SDK’s) we’re referencing in our project. 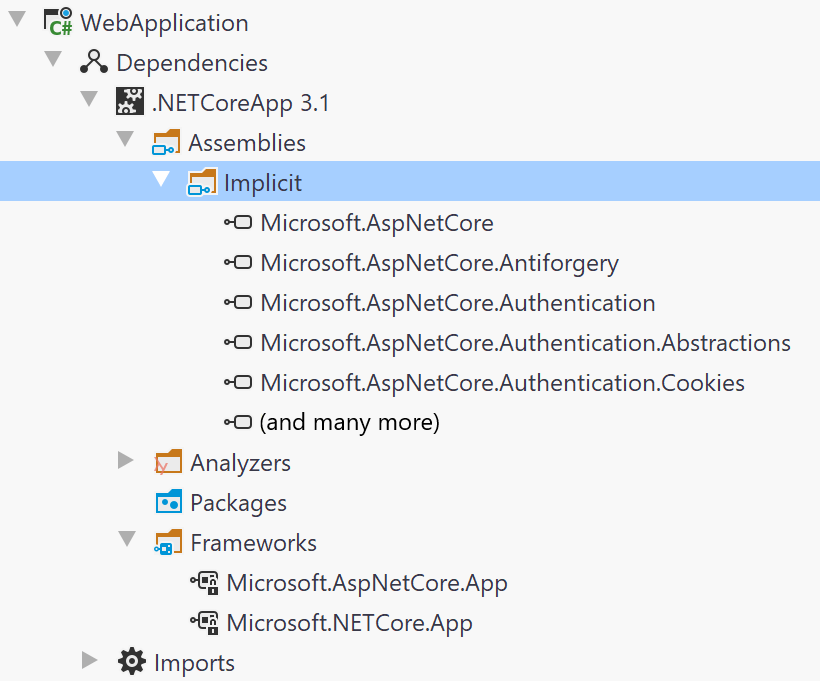 When ASP.NET Core just came about, the idea was be that a project could reference a tree of NuGet packages. Since then, the .NET folks have reworked this a bit and are now referencing assemblies instead when they are part of an SDK or Framework. These assemblies are part of the SDK you install to your machine anyway, so why not use them instead of downloading them? There are probably other advantages that sparked this rework, but let’s not get nerd sniped into figuring that out while in another nerd snipe. This is not the movie Inception!

Is There More Information the Developer Tools could use?

A good nerd snipe goes beyond! If we’re investigating the why, let’s maybe also see if there is more information we could gather to make that quick fix work! Spoiler alert: that does not seem to be the case, but let’s still see why that is!

We ended the last section with the conclusion that .NET Core’s SDK/project system uses assembly references. Circling back to IServiceCollection, that type lives in the Microsoft.Extensions.DependencyInjection.Abstractions.dll assembly that is implicitly referenced. But also in the Microsoft.Extensions.DependencyInjection.Abstractions package on NuGet!

Why are there all these smaller NuGet packages out there that seem to duplicate the framework assemblies?

Your favorite libraries may be using some of those, and it’s probably better for them to reference just the packages they require instead of everything else out there. If my open source library just needs IServiceCollection, I would not want to reference “all of ASP.NET Core”, just that Microsoft.Extensions.DependencyInjection.Abstractions package.

If we navigate our local hard drive and find the folder where a framework/SDK is located, there is a file named PackageOverrides.txt that lists those.

Sure enough, there is an entry for the Microsoft.Extensions.DependencyInjection.Abstractions package. The overrides file describes that this SDK replaces the package (version 3.1.0) in case of conflicts.

Cool! That’s it, right? Can’t the tooling use this to know which package to reference in that quick fix?

Not really. The file only describes which packages are overridden by the framework/SDK, but not which assemblies are contained in which package. In other words: the quick fix still has no correlation between the type (for which we know the assembly), and the package.

This is something reverse package search could perhaps help with, but it looks like we’ll need to investigate more.

Conclusion: There does not seem to be a reliable source to correlate the framework’s implicit assembly reference with a NuGet package. If you do know if such source exists, let me know!

This is not a happy ending! At least, not for covering the case where that quick fix fails. But what if…

…what if an existing feature could be leveraged to power that quick fix’ functionality?

Rider indexes packages that are located in the global NuGet packages folder on your system. So in our example, if the Microsoft.Extensions.DependencyInjection.Abstractions package with the correct version would be in our NuGet cache, ReSharper and Rider will index it and make that quick fix work.

The glue, thus, could be to automatically download packages from PackageOverrides.txt to disk. Who knows, this might show up in a future version of the IDE’s!