Many developers are building Single-Page Applications (SPAs) using popular frameworks like Angular, React or VueJS. They all come with an easy way to generate all required HTML, CSS, JavaScript and Webpack artifacts required to deploy to production, usually an NPM script like npm run build away. Having to build all those artifacts multiple times while developing on our local machine is not too pleasant, all of them come with a way to launch a development server that hot reloads artifacts when needed, usually another NPM script (such as npm run start) away.

Now switch to he .NET world. We can run our ASP.NET Core + React/Angular application on our development environment and get things like hot reload work automagically, and when we run an msbuild /t:Publish, all of the artifacts are built and generated for production, and added into our .NET deployment.

So when Paul Everitt and myself were preparing for a webinar, React+TypeScript+TDD in Rider (recording should be online soon), we were wondering how exactly the ASP.NET Core + React/Angular development experience is working under the hood after scaffolding a new application using the dotnet new react/dotnet new angular templates for .NET work.

Before we dive into how the development and release side of things work, let’s first see what a typical solution and project looks like. I’ve created a new ASP.NET + React project in Rider, which uses dotnet new react under the hood. 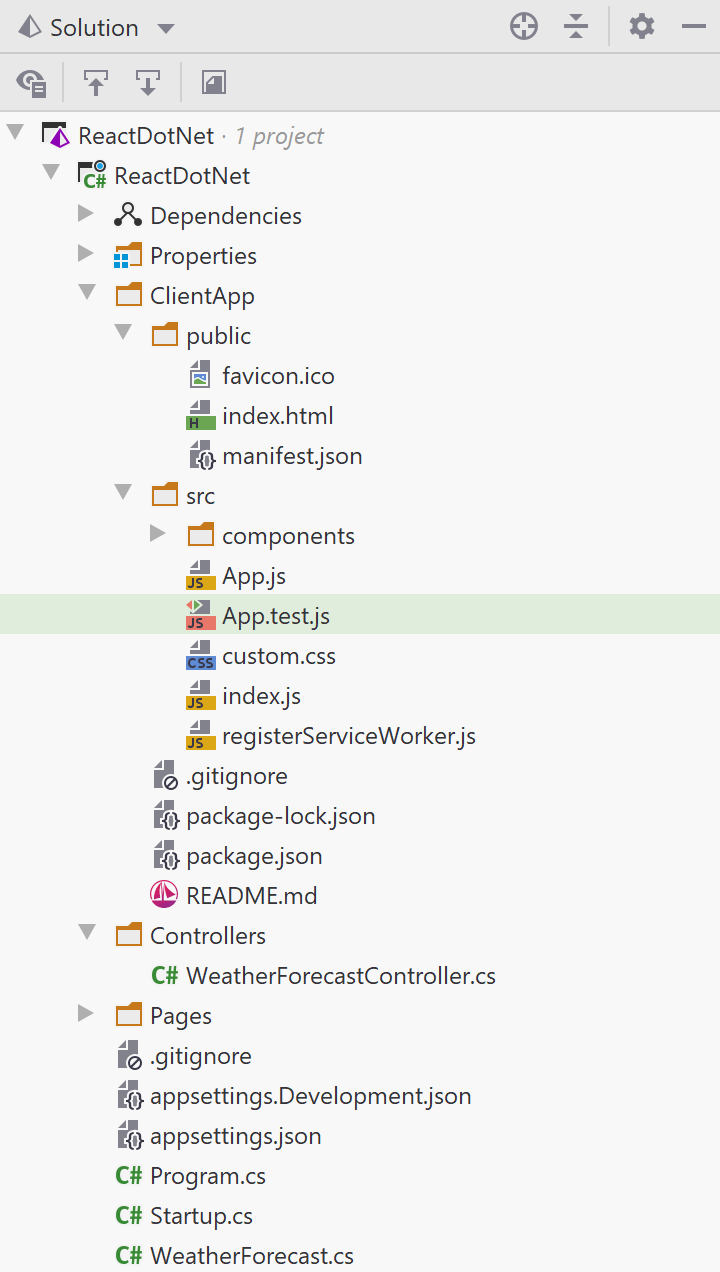 What happens if we F5 (Run) our application? Our ASP.NET Core will start and serve our SPA application. What’s cool, though, is that whenever we make a change to the React app, things are hot-reloaded in the browser.

Change a template? Change some CSS? Change a model? All fine, there is no need to stop and restart the entire ASP.NET Core application: the client-side app will auto-reload whatever is needed and provides a very smooth workflow.

How does it work? Let’s start with our Startup.cs and see what we can find in there.

Both ConfigureServices and the Configure methods are interesting, and each of them contributes to the development as well as the publishing experience.

Let’s start with ConfigureServices. We will see a call to register “SPA static files” (AddSpaStaticFiles()), which is where we register the output path for our SPA. In other words: when publishing our app to production, where in the directory structure can all assets for our SPA be found.

More interesting for the development environment is Configure. Note I’ve removed a few things to keep it concise, use the ASP.NET + React/Angular templates on your machine if you want the full code!

The most interesting thing here for the development experience is this:

When we are running in development, we are registering yet another middleware (by calling UseReactDevelopmentServer()) which will proxy NPM. The npmScript: "start" parameter should be a hint for that: the ReactDevelopmentServerMiddleware that is registered here will call npm run start and proxy it in our ASP.NET Core application.

This means that when using the ASP.NET Core + React/Angular templates, the development experience is essentially what you would get when running npm run start directly and working on the front-end. The only difference being that now our server-side API and client-side SPA will be served by our ASP.NET Core application.

Have a look at the source code for ReactDevelopmentServerMiddleware on GitHub. At some point, it will run npm run {npmScript}, pass a few environment variables (for example to not launch the browser a second time), and proxy the process that has been started.

So when changing CSS/JavaScript/templates/…, it’s not ASP.NET Core making everything work, it’s the exact same npm run start doing this under the hood.

One more thing to note: the project file for our application contains some guard rails to make sure node and NPM are available on your system, and npm install has been run to fetch the entire Internet required dependencies. Go on, select the project in Rider and hit F4 (Go to Source), and have a look.

Before build (BeforeTargets="Build"), we check whether we’re in Debug mode and whether node_modules exists. If not, we try running node --version to see if node is installed, and then npm install to ensure all dependencies are there.

Pretty impressed by how simple(ish) yet clever this was done, kudos to the ASP.NET team!

As we have seen, during development, ASP.NET Core runs npm run start and proxies its development experience. This is definitely not something we would want in production!

Ideally when publishing our application, we want to run npm run build so that all artifacts required by our SPA are generated in ClientApp/build, then include that folder in our ASP.NET Core build output so it can be served by the middleware we registered using UseSpaStaticFiles() earlier.

As it turns out, this is exactly what happens! Again in our project file, an MSBuild target named PublishRunWebpack was added, which will, as part of running msbuild /t:Publish, do a couple of things for us:

The raw target from our project file:

What about other SPA’s

You may have noticed this post only covered React. ASP.NET Core’s emplates come with a similar setup for Angular, but none for VueJS or whatever other SPA framework you may be using.

Using the concepts described in this post, I hope you will be able to wire up VueJS or others as well. In fact, here’s a blog post by Douglas Cameron that describes how you could wire up VueJS.