Usually on my development machine, I run ASP.NET Core applications in Kestrel. It’s easy to do, the project templates .NET Core provide create a nice launchSettings.json to start it from the command line, etc.

However, I was asked to help someone out with hosting ASP.NET Core in IIS Express. Great! The default launchSettings.json contain an entry for that as well, so I ran dotnet run --launch-profile "IIS Express".

To my surprise, not a lot happened. IIS Express did not launch, and the IDE was quite silent as well. So I tried in a nightly build of JetBrains Rider, seeing the same.

That must mean my IIS Express configuration is wrong! Good thing IIS Express can be launched from the command-line, and usually displays an error when something is wrong - this would help me troubleshoot for sure!

Ehm. Thanks? Windows Error logs and other places were not really helpful either.

Stepping back: prerequisites for ASP.NET Core on IIS Express

So, something was wrong in IIS Express, but it refused to tell me what. Taking a step back is always a good idea: what do we need to run ASP.NET Core on IIS Express?

To be sure I had all of them installed, I re-installed them all. Only to keep seeing Error: in IIS Express. Huh.

How does ASP.NET Core work in IIS Express?

As I mentioned before, the dotnet command does not support IIS Express directly. We need to use an IDE like Visual Studio or Rider to launch IIS Express with the correct arguments and a configuration file.

This configuration file is important: IIS Express cannot host .NET Core applications out of the box. It needs to have the .NET Core hosting bundle installed in order to glue ASP.NET Core into the IIS Express hosting model. It does that by adding a module that then spawns a child process, which IIS Express forwards traffic to.

Have you ever written such configuration file? Possibly, but most probably not. Visual Studio and Rider generate it for us, and store it under our solution folder in one of these locations:

After double-checking these files with a colleague, it seemed that these did not contain any mention of ASP.NET Core. More huh.

Side-step: how does the IDE generate applicationhost.config?

Next, the launchSettings.json file is read and used to set some details such as the application URL, whether SSL should be enabled or not, authentication settings, etc.

Once that’s done, the command I mentioned earlier is used to start IIS Express to host our application.

Now, checking %PROGRAMFILES(x86)%\IIS Express\config\templates\PersonalWebServer\applicationhost.config also yielded no mention of any .NET Core hosting modules. So any project that copied from that template, would also not have ASP.NET Core support. Let’s fix it!

The .NET Core hosting bundle should install a couple of things:

The binaries were there, the updates in applicationhost.config were not. Here’s what to add: 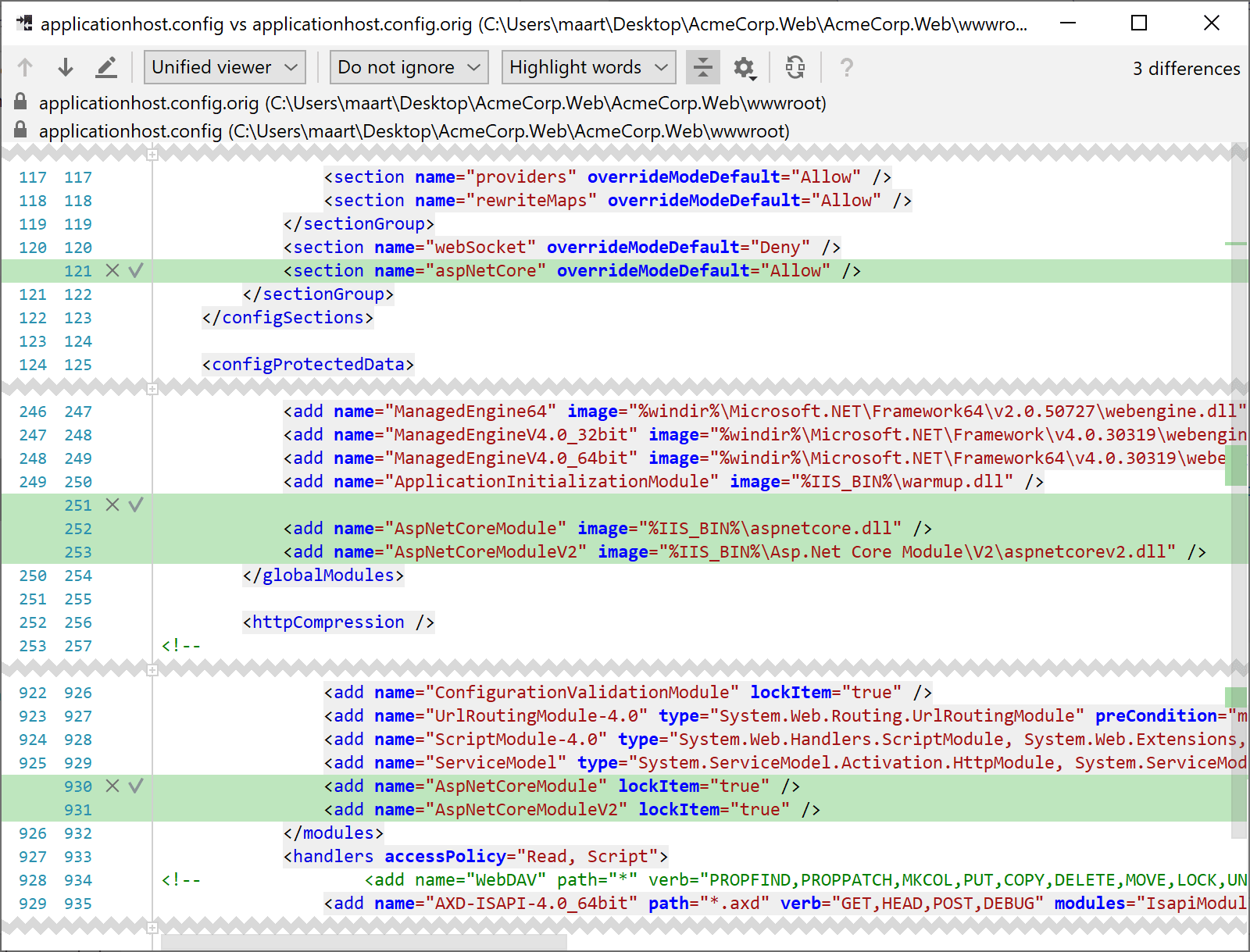 In case you want to copy/paste some things:

I hope this helps you, or my future self, in case ASP.NET Core on IIS Express doesn’t work first-time.

A big thank you to Ivan Migalev, my colleague who helped troubleshoot!