If you are familiar with OAuth2’s protocol flow, you know there’s a lot of things you should implement if you want to protect your ASP.NET Web API using OAuth2. To refresh your mind, here’s what’s required (at least):

That’s a lot to build there. Wouldn’t it be great to outsource part of that list to a third party? A little-known feature of the Windows Azure Access Control Service is that you can use it to keep track of applications, user consent and token expiration & refresh token handling. That leaves you with implementing:

On a side note: I’m aware of the road-to-hell post released last week on OAuth2. I still think that whoever offers OAuth2 should be responsible enough to implement the protocol in a secure fashion. The protocol gives you the options to do so, and, as with regular web page logins, you as the implementer should think about security.

I’ve been doing some demos lately using www.brewbuddy.net, a sample application (sources here) which enables hobby beer brewers to keep track of their recipes and current brews. There are a lot of applications out there that may benefit from being able to consume my recipes. I love the smell of a fresh API in the morning!

Here’s an API which would enable access to my BrewBuddy recipes:

OAuth2 is a different state of mind 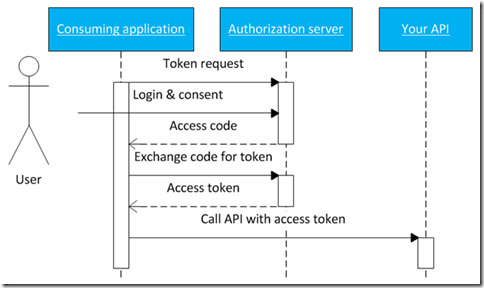 The end user loads a consuming application (a mobile app or a web app that doesn’t really matter). That application requests a token from an authorization server trusted by your application. The user has to login, and usually accept the fact that the app can perform actions on the user’s behalf (think of Twitter’s “Allow/Deny” screen). If successful, the authorization server returns a code to the app which the app can then exchange for an access token containing the user’s username and potentially other claims.

Now remember what we started this post with? We want to get rid of part of the OAuth2 implementation. We don’t want to be bothered by too much of this. Let’s try to accomplish the following: 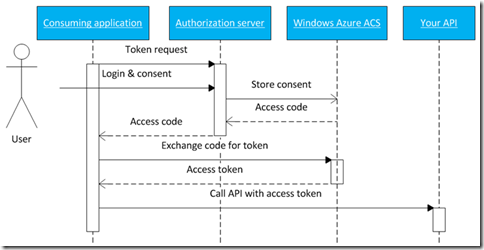 Let’s introduce you to…

“That looks like an assembly name. Heck, even like a NuGet package identifier!” You’re right about that. I’ve done a lot of the integration work for you (sources / NuGet package).

WindowsAzure.Acs.Oauth2 is currently in alpha status, so you’ll will have to register this package in your ASP.NET MVC Web API project using the package manager console, issuing the following command:

This command will bring some dependencies to your project and installs the following source files:

Next to these files, the following entries are added to your Web.config file:

These settings should be configured based on the Windows Azure Access Control settings. Details on this can be found on the Github page.

After populating Windows Azure Access Control Service with a client_id and client_secret for my consuming app (which you can do using the excellent FluentACS package or manually, as shown in the following screenshot), you’re good to go. 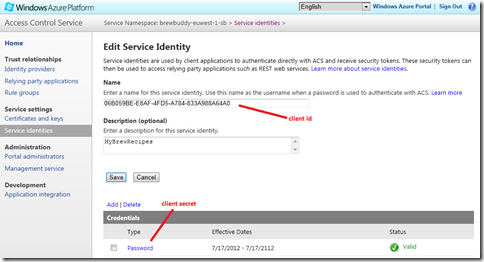 The WindowsAzure.Acs.Oauth2 package adds additional functionality to your application: it provides your ASP.NET Web API with the current user’s details (after a successful OAuth2 authorization flow took place) and it adds a controller and view to your app which provides a simple consent page (that can be customized): 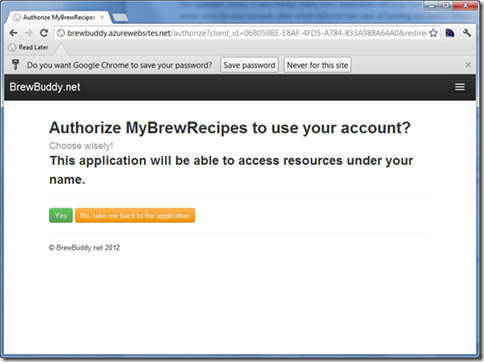 After granting access, WindowsAzure.Acs.Oauth2 will store the choice of the user in Windows Azure ACS and redirect you back to the application. From there on, the application can ask Windows Azure ACS for an access token and refresh the access token once it expires. Without your application having to interfere with that process ever again. WindowsAzure.Acs.Oauth2 transforms the incoming OAuth2 token into a ClaimsIdentity which your API can use to determine which user is accessing your API. Focus on your API, not on OAuth.