On a sidenote: we're sharing API keys between both services. If you also want to share the same password with both services, simply go to your MyGet profile page and re-enter your password. We'll keep it in sync after that.

Publishing a symbols package for use with MyGet

As I will assume you are used to publishing packages to NuGet and SymbolSource, here’s what changes. First of all, you will require the URLs to which to publish. Log in to MyGet and browse to your feed details. The Feed Details tab will give you all the information you need, as you can see in the following screenshot: 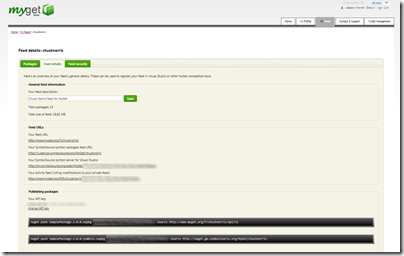 In short, your feed URL remains the same. If you want to consume your private feed in Visual Studio or using the NuGet Package Manager Console, simply add http://www.myget.org/F/yourfeedname as the source. The thing that changed is the publish URL: if you want to publish your packages to MyGet, use the URL http://www.myget.org/F/yourfeedname/api/v1 as the publish URL. For symbol packages, your URL will be in the form of http://nuget.gw.symbolsource.org/MyGet/yourfeedname.

The publish workflow to publish the SamplePackage.1.0.0.nupkg to a MyGet feed, including symbols, would be issuing the following two commands from the console:

An example of these commands can also be found on the Feed Details tab for your MyGet feed.

When logging in to MyGet, you can find the symbols URL compatible with Visual Studio under the Feed Details tab for your MyGet feed. This URL will be the same for all feeds you are allowed to consume, so no need to configure 10+ symbol servers in Visual Studio. Here’s how to configure it.

First of all, Visual Studio typically will only debug your own source code, the source code of the project or projects that are currently opened in Visual Studio. To disable this behavior and to instruct Visual Studio to also try to debug code other than the projects that are currently opened, open the Options dialog (under the menu Tools > Options). Find the Debugging node on the left and click the General node underneath. Turn off the option Enable Just My Code. Also turn on the option Enable source server support. This usually triggers a warning message but it is safe to just click Yes and continue with the settings specified. 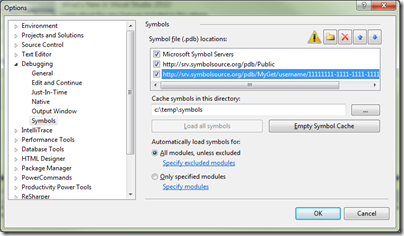 Keep the Options dialog opened and find the Symbols node under the Debugging node on the left. In the dialog shown in Figure 4-14, add the symbol server URL for your MyGet feed: http://srv.symbolsource.org/pdb/MyGet/username/11111111-1111-1111-1111-11111111111. After that, click OK to confirm configuration changes and consume symbols for NuGet packages.