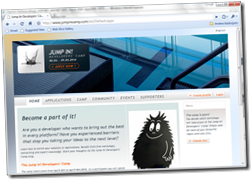 I just got the following invitation from Microsoft, and would like to encourage  you to participate as well if you are interested in bot PHP and the Microsoft worlds.

Open source programming and Microsoft: two incompatible worlds? Microsoft is partnering with renowned actors of the open-source community to organise the Jump In! Developers' Camp in an effort to combat this misperception. Twenty-five knowledge-hungry open source application developers from all over Europe will be invited to spend four unforgettable days of dialogue, networking and workshops at the beautiful Panorama Resort & Spa Feusisberg in Switzerland.

The Jump In! Developers' Camp is designed primarily for open-source application developers who are interested in increasing their skills in a range of specific areas. Here they will be able to experiment with ways of combining open-source technologies with Microsoft products to optimize applications. But don’t worry: no one is out to ‘convert’ anybody! The aim instead is to promote interoperability, problem-solving and enhance programming skills. Software experts will be on hand to provide tips and advice, and a range of workshops will be held on topics including Azure, IIS, Silverlight and more in combination with open-source applications. Plenty of time for actual coding will be available.

Potential participants are invited to file an application at www.jumpincamp.com, outlining their profile. The 25 developers who are creating the most “buzz” for themselves and their programming abilities will then be selected. Attendees of the JumpIn! Developers' Camp will then record their impressions and experiences in a live blog for their community of ‘followers’. The Camp will be held between 6 - 9 April 2010.

Register now and apply for taking part on www.jumpincamp.com.